How would your life be, if you knew that you could die any moment? That everything you had in your mind about life was a waste. You just had a clock going ticktock and racing towards your death. This feeling was the entire life of Stephen Hawking.

“I have lived over two-thirds of my life with the threat of death hanging over me. Because every day could be my last, I have developed a desire to make the most of each and every minute” says Stephen Hawking.

Stephen Hawking, the renowned scientist, and discoverer, who recently died, had to live with this fact every day. At the age of 76, he left his mortal body with a smile and a lot to read and understand for future scientists and science students. At the age of 21, the threat of death hung over him and remained at the same place for the rest of his life.

Known for his various concepts and discoveries like origin of the universe, time, the big bang theory, black hole radiation, gravitational and space-time singularities, universe without space-time boundaries and the high likelihood of existing extraterrestrial life, he marked his life span as a legend.

“However difficult life may seem, there is always something you can do and succeed at.” he said.

Born in 1942 at Radcliffe infirmary and the county hospital in Oxford, England. Stephen was the second child of his parents. He had an elder sister Mary, younger Philippa and a younger brother Edward hawking. Stephen was an exceptional student since his childhood. Although, he had a relaxed attitude towards study but his mind was atypically able as compared to other kids.

In his self-made documentary, Stephen says,

“I had a passion to understand how things worked, from a toy train to the whole universe”

His sister Mary explains that he had a very keen mind. She also tells that he had a passion to understand how stuff worked. She finished off by displaying the fact that since childhood he used to sit alone and look towards sky, thinking about eternity and how it works.

Born exactly after 300 years’ death anniversary of Galileo, Stephen Hawking was a brilliant mind. He was a very humorous man since childhood till his death days. When asked about eureka moment of scientific discovery he says,

“I wouldn’t compare it to sex, but it lasts longer”

After completing his schooling, he started his college at Oxford. He wanted to continue his education in mathematics but due to its unavailability, he opted for physics. And well, we all know how that turned out later.

Just like school he remained loose towards his grades but still managed to pass through with a greater knowledge of the subject. It will be correct to say that he spent his time at Oxford just like any other college student would.

In his documentary, Stephen confesses that he was not very attentive to the concept of ‘making and saving money’. During his stay at Oxford, he made only a thousand dollars in three years, which is a work of average one hour a day. Definitely, he was not very proud of that but he spent most of the time partying. He was witty, popular and a member of college boat club.
Basically, he was the male ‘it girl’ of Oxford at those times and maintained that place the whole time.

In between his college life and personal fun time at Oxford he had his first encounter towards illness. He knew something was wrong when he fell down for no reason. After a span of time he again fell down but this time from stairs. He rolled all the way down to the end of the stairs and lost his consciousness. When he again became responsive he was unable to remember who he was for some moments.
Even though he gradually became aware of his changing health conditions, he managed to complete his study at Oxford college.

After Oxford consummated, it was time for Cambridge. In the year 1962, Stephen Hawking started his Ph.D. at Cambridge college. He was at the spire of his young age and committed to working. It was an exciting time for astrology, astronomy, and cosmology.

In those times two theories ruled the world. The first one was steady state theory. It said that universe always existed and would exist forever. This theory was simple and comforting.

His research got interrupted due to his increasing illness. Disturbed muscle coordination was the major reason of concern for him at that time. Instead of focusing on his research, he had to focus on keeping control of himself. He got distracted by his physical condition and decided to keep it to himself.

However, he couldn’t keep it hidden for long. Due to his aggravate condition, he got admitted to a hospital where he got diagnosed with ALS (amyotrophic lateral sclerosis). This disease was going to affect his nerve cells in the brain and spinal cord. He was given a maximum of three years live.
With all that going on in his life and all his dreams and aspirations, he couldn’t accept the fact that he was going to die eventually.

Going back to Cambridge and pursuing his studies back didn’t help him either. As he chose not to talk about it, slowly and steadily he was going into the depression. The thoughts of not having enough time to live sucked out the life out of him at a faster rate. At first, ALS picked up a pace and accelerated but eventually it slowed down.

It seemed like an end for him. But just like a ray of light in dark, he came in contact with a girl. The girl who later became his wife and is known as Jane Hawking now.

This is how Stephen Hawking describes that time 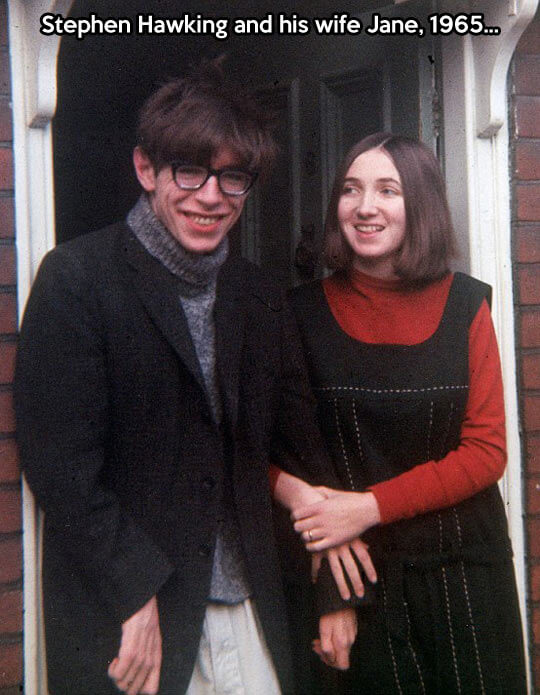 "What really made the difference was falling in love with a girl called Jane wild, whom I had met the same time I was diagnosed. This gave me something to live for"

And truly this was what he needed. Even with his slowly deforming body, he could now feel the heat back. He was again seen solving equations and spending time at college and with his research.

"Falling in love and getting engaged was the motivation that I needed" said Stephen Hawking.

He knew that to do so he had to get a job. And to get a job he had to complete his Ph.D. This doubled his determination and he started to work harder. And this was the turning point in Stephen’s life. He had crossed the toughest point and was moving towards the glorious future that was standing by him.

...and get awesome updates from us!

Don't worry, we WILL NOT spam you!